Maybe a bit off topic…but maybe some interest anyway. A client have a outdoor gig and without any supply of external power…and asked if I was able to fulfill such request. And with a Behringer Flow 8, a power bank of 40000mA, 2x Mackie Freeplay 150W speakers…I think I can say yes! 🙂

Of course, I also had to test if I was able to record 8 channels from the Flow 8 using my Raspberry PI multitrack recorder – www.z-liverec.com using the same power bank…and the answer was yes even here – but the solution consumes power. The battery will probably last for 1-1.5 hours) 🙂

But Z-LiveRec recorded 8 channels without any problems – you are even able to record the bluetooth stream (channel 9-10) at the same time. Note that the Flow 8 only have 4 USB return channels – so it is not possible to playback channels to make a virtual soundcheck etc.

But a pretty neat small environment! 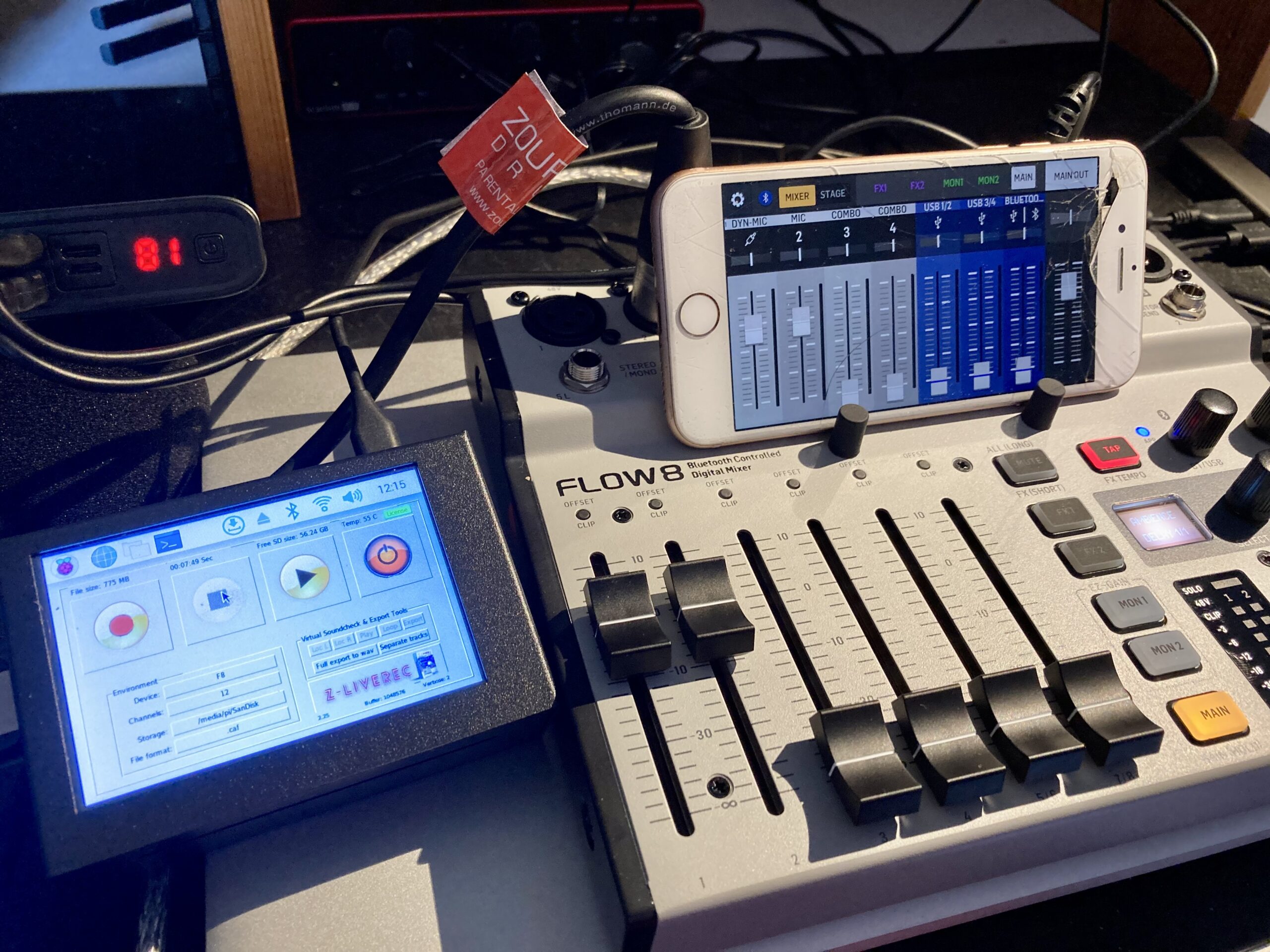 The background for this post was that some Z-LiveRec users experienced problems with USB Sticks formatted in exFAT format and using the resources demanding W64 file format. The idea with using exFAT is the ability to utilize larger storage medias without any limits in file size – compared FAT32 which limit single files to 4GB. W64 is a wav format which is using 64 bits file structure…and supports unlimited file sizes – compared to wav which has a limit on 2GB.

By using W64 on exFAT…Z-LiveRec is able to store multitrack files which easily can be like 22GB for a 1.5h recordings with 48 channels. But it is here some users have started to see problems – a lot of buffer overruns was reported in Z-LiveRec. If selecting less channels – the problem disappears. Note: there is also another unlimited format available in Z-LiveRec called “CAF” (Apples multitrack format) which have the same characteristics as W64 – which seems to run more smooth and is nicer in performance for a Raspberry PI – so one solution is to use this format instead.

But why do W64 report a lot of buffer overruns in exfat? I had to investigate this more in detail – especially if using FAT32 instead – no problem was reported. 🙂

First check the version of the Raspberry PI OS used:

Ok – in theory – can a storage device be measured by Raspberry PI? Yes by moving to the drive you want to measure:

and then execute the following code:

and the system will show: (Takes a little while)

Ok, using this info and apply it to our storage devices used will give us the following data:

Ok, when used these storage types in Z-LiveRec with w64 format!

ExFAT seems to have performance problems in Buster…but works great in Bullseye! It seems like a faster USB stick makes great improvements to the write speed. Another recommendation is to use Sandisk Extreme Go USB 3.2 Flash drives with 64GB – which has a read speed of 395 MB read/s and a write speed of 100 MB/s. Compared to the Sandisk Ultra Slim Fit – which has a read speed on 150MB/S and a write speed on 55MB/S – the Extreme GO USB stick can improve the situation with experienced buffer overruns a lot! (e.g Zero overruns!)

We use cookies on our website to give you the most relevant experience by remembering your preferences and repeat visits. By clicking “Accept All”, you consent to the use of ALL the cookies. However, you may visit "Cookie Settings" to provide a controlled consent.
Cookie SettingsAccept All
Manage consent

This website uses cookies to improve your experience while you navigate through the website. Out of these, the cookies that are categorized as necessary are stored on your browser as they are essential for the working of basic functionalities of the website. We also use third-party cookies that help us analyze and understand how you use this website. These cookies will be stored in your browser only with your consent. You also have the option to opt-out of these cookies. But opting out of some of these cookies may affect your browsing experience.
Necessary Always Enabled
Necessary cookies are absolutely essential for the website to function properly. These cookies ensure basic functionalities and security features of the website, anonymously.
Functional
Functional cookies help to perform certain functionalities like sharing the content of the website on social media platforms, collect feedbacks, and other third-party features.
Performance
Performance cookies are used to understand and analyze the key performance indexes of the website which helps in delivering a better user experience for the visitors.
Analytics
Analytical cookies are used to understand how visitors interact with the website. These cookies help provide information on metrics the number of visitors, bounce rate, traffic source, etc.
Advertisement
Advertisement cookies are used to provide visitors with relevant ads and marketing campaigns. These cookies track visitors across websites and collect information to provide customized ads.
Others
Other uncategorized cookies are those that are being analyzed and have not been classified into a category as yet.
SAVE & ACCEPT